This section is based on this link, which is fairly old. I am trying to sort out what exactly has changed in Xen 4.0 and may not have all the details right. Please feel free to jump in and make changes if you see a mistake or a place that could be improved.

The "real" OS on a Xen server is not real at all, but in fact just another virtual machine with special access to the hardware. This first virtual machine is known as dom0.

Normally, this is the name of a "main" ethernet device. However, under Xen, this does NOT reflect the real hardware once the xend daemon has started!

If you followed the HowTo on creating a [Node Xen cluster on Fedora 13], then ethX also acts as the bridge.

Replace 'X' in 'ethX' with a number reflecting a given ethernet device. For example, 'eth0' is the first ethernet device, 'eth1' the second and so on.

The pethX device(s) exist only on dom0.

When xend starts, it renames the "real" 'ethX' to 'pethX' in order to create a virtual copy of it. This is done to facilitate bridging and routing. So then, pethX devices are in fact the interfaces to the real hardware ethernet devices.

Replace 'X' in 'pethX' with a number reflecting a given ethernet device. For example, 'peth0' is the first ethernet device, 'peth1' the second and so on.

The vethX device(s) exist only on dom0 and only for a short time during xend startup.

During the Xen startup process, ethX is brought down and it's MAC and IP addresses are copied to vethX. Once done, ethX is renamed to pethX to move it out of the way. Then vethX is renamed to ethX to take the place of the pethX interface. As such, vethX devices exist for only a short time. You should never need to worry about or factor in these devices into your networking plans.

The vifX.Y devices exist only on dom0.

These are Xen's virtual interfaces used to connect an ethX device on dom0 to a pethZ device on a domU. Please be aware that there need not be any correlation between eth0 on dom0 and eth0 on domU! This is why 'X' and 'Z' are used separately here.

Specifically, when Xen starts a domU, that virtual machine's ID# plus a given dom0 ethX device number are used to create one or more virtual interfaces inside dom0. For example, if you want to connect eth0 on dom0 to eth0 on dom4, you will do so via vif4.0 where '4' matches the domU ID# and '0' matches the ethernet device number in dom0. The actual routing goes through xenbr0. If this is still confusing, take a look at the network map below.

The virbrX device(s) exist only on dom0.

If you followed the HowTo on creating a [Node Xen cluster on Fedora 13], then virbrX is not used. Instead, the virtual ethX also acts as the bridge.

Network Map - Putting it all together

This map is a sample of a four-VM setup in a single Xen host. You will notice that eth1 is not connected to any domU's because, in this case, it is used for the DRBD channel. All virtual machines have a connection to eth0 because that is the virtual machine network's "back channel". In practice, there is no internet connection on eth0, and thus on the xenbr0 bridge, except through the firewall, dom1. The dom6 shows a link to eth2, which would give it a direct connection to the Internet.

Note: These have not been updated for Xen 4.0 yet.

This is one an example of networking inside a two node cluster. 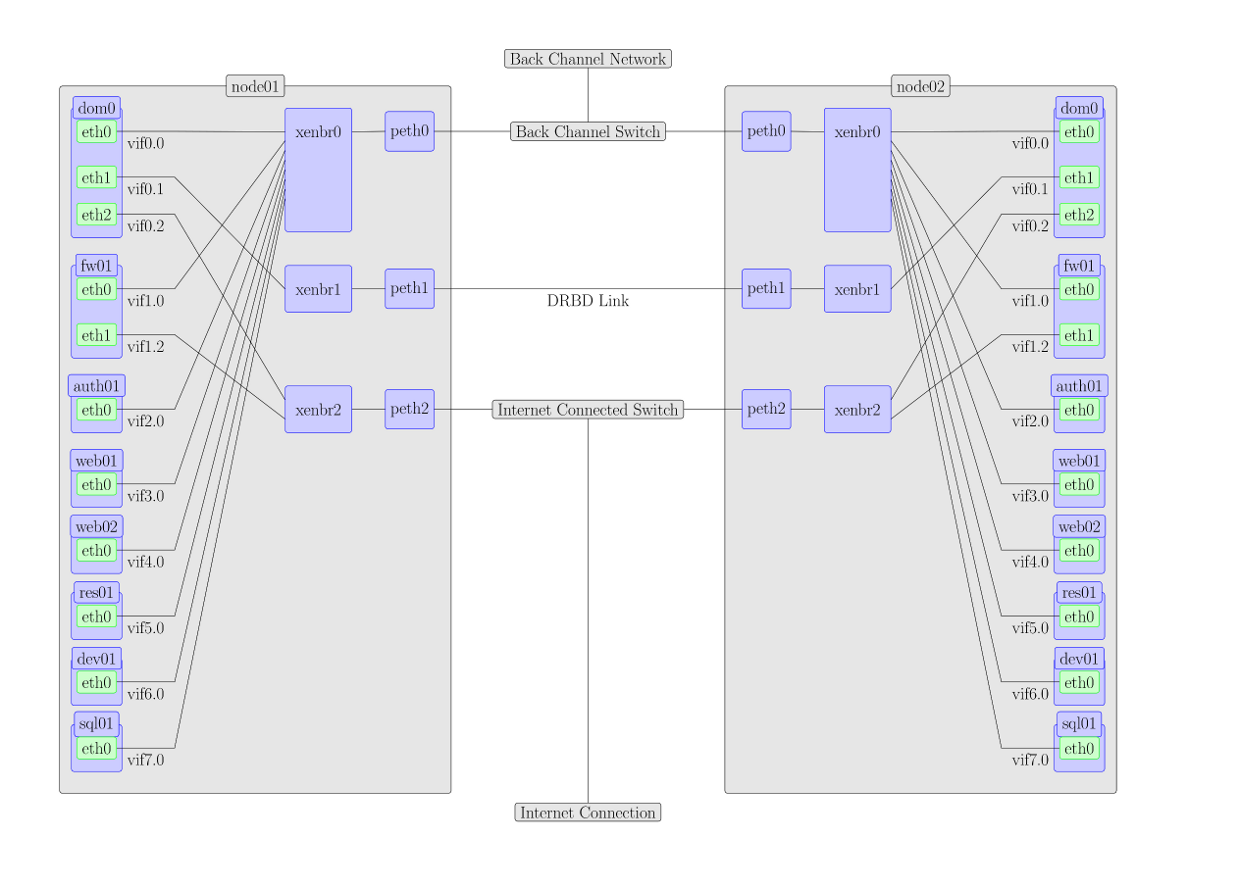