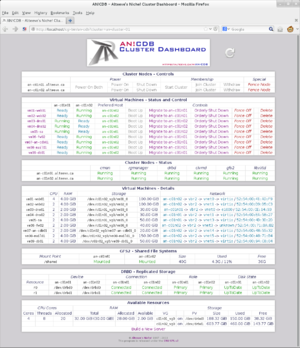 This tutorial will help you build an Anvil Mark-2. It differs from the previous tutorial in that it does not focus on learning the foundation of the cluster. Instead, it's focus is to help you create a reliable platform for your servers.

Think of this tutorial as a recipe for making a great cake, rather than learning the chemistry behind baking.

We will be building up two servers, on redundant power and networking, to create a highly-available, highly fault-tolerant platform for virtual servers.

It will be built on 100% open-source software.

Specifically, we will be using;

The hardware used in this tutorial is;

You may, of course, use other hardware. However, you need to ensure a few things;

If you run into problems using other hardware, please contact us and we will do our best to help get the Anvil m2 working on your platform.

This tutorial assumes it's readers be familiar with basic command-line Linux tools. You will need to be familiar with networking concepts and terms. It uses vim as the default editor, though readers can safely substitute their preferred text editor, provided it uses standard unix-style line wrapping. Where ever possible, commands and shortcuts will be explained in detail.

The hardware selection and it's configuration may seem overly complex at first, but every component is there for a reason.

If your devices have just one power supply, then you will plug the first device into the first power rail and the second device into the second power rail. In this case, a power failure will take out half your devices, but the remaining devices will continue to operate on the remaining rail. This will likely cause interruption, so it is not necessarily fault tolerant, but the high-availability nature of the Anvil should mean recovery would be quick and automated.

The need for the switched PDUs, specifically, is to provide a backup fence device. The importance of this will be covered in more detail shortly.